The Uncharted Adventure to the Pacific: Lewis and Clark Expedition

Have you ever bought a tract of land so massive you didn’t know what you were buying? Although today this scenario seems highly unlikely and possibly like a terrible decision, this is exactly what Thomas Jefferson did in 1803 when the United States acquired the Louisiana Territory from France. The 828,000-acre acquisition was commonly known as the Louisiana Purchase and nearly doubled the size of the U.S. Although Jefferson didn’t know exactly what he had bought, he envisioned enormous erupting volcanoes, gigantic wooly mammoths, and intriguing mountains made of pure salt. Although this isn't exactly what they found, what they did discover was both amazing and valuable.

Thomas Jefferson was eager to discover not only what was acquired in the Louisiana Purchase, but also what types of mysterious geography was located west of the purchase area. He commissioned the expedition for several reasons with a variety of objectives that he hoped they could accomplish.

Jefferson, along with many others, strongly believed that a Northwest Passage existed. That's to say, they believed there was a water route connecting the Mississippi river systems to the Pacific Ocean. One of the goals of the expedition was to locate this route for commerce purposes. Since there were no reliable maps of this territory, Jefferson also hoped the crew could explore and ultimately map it. A third primary reason for dispatching the expedition was to establish an American presence in the west before foreign powers like Britain or Spain claimed it.

Finally, deep down, Thomas Jefferson believed the future prosperity of the nation depended on yeoman farmers expanding into the west. According to UShistory.org, a yeoman farmer was a person who owned his own modest farm and primarily used family to work it.

There were also a couple secondary objectives the group had. President Jefferson wanted to learn more about the actual land and life forms that existed there. He sent the leader of the expedition to Philadelphia before they left for the northwest for training in fields such as zoology, botany, medicine, and astronomy. The aim was to learn about new plants, animals, geography, people, and not get lost while they were doing it. Another important goal was to establish relationships and trade with the Native American tribes that already inhabited the area. Even though there was a sincere desire to learn, economic incentives such as commerce may have been the dominant motive for the expedition.

Meriwether Lewis was a renaissance man or a jack-of-all-trades so to speak. He had military experience in the state militia and regular army, eventually achieving the rank of captain. He was also very intelligent and a skilled frontiersman. In 1801, he began acting as Thomas Jefferson’s private secretary. Jefferson said, “It was impossible to find a character who to a complete science in botany, natural history, mineralogy & astronomy, joined the firmness of constitution & character, prudence, habits adapted to the woods & a familiarity with the Indian manners and character, requisite for this undertaking. All the latter qualifications Captain Lewis has.” In other words, he was the obvious choice.

Lewis chose William Clark as his right-hand man and co-commander of the expedition. Clark had similar experience to Lewis in that he had militia and army experience, eventually becoming a Lieutenant. He had seen a lot of action in several different conflicts the militias and armies were involved in. Clark also was a skilled frontiersman, possibly even more so than Lewis.

Many people don’t know how Lewis and Clark met. Several years before the expedition was commissioned Lewis had been court-martialed due to allegedly challenging his superior officer to a duel in a drunken dispute. He was found not guilty, but his superiors still transferred him to a different company under a new commander. His new commanding officer was William Clark.

The group selected to participate in the expedition was called the Corps of Discovery. In addition to Lewis and Clark, the unit was predominantly comprised of U.S. military volunteers. Members of the expedition also included French men hired to work as boatmen or hunters, a slave, a Shoshone woman named Sacagawea, a newborn baby, and a French trader.

Congress approved the expedition and allocated $2,500 for expenses according to the History Channel which included gifts to present to Native Americans. In May of 1804, Lewis, Clark, a dog purchased for $20, and 31 others departed from Camp Dubois (also known as Camp Wood), near present-day Wood River, Illinois, to begin their adventure. As you might expect, they faced extreme hardships and adversity throughout the duration of their trip.

Several trials were held as a result of unacceptable behavior and punishments were dealt ranging from 50-100 lashes sometimes for numerous days. There were bear chases and even a bear attack as well as snake bites suffered. Many group members came down with mysterious illnesses. Hunger was a legitimate issue and people resorted to eating horses and candles.

The expedition went through many storms, and Sacagawea saved many of the documents when a boat tipped over. At times the group was challenged by hostile encounters and interpretation difficulties with Native American tribes and ended up having to do some serious boat building, some of which was unsuccessful. Even in the face of all these obstacles, Charles Floyd was the only Corps of Discovery member that died during the expedition. Historians now think was from acute appendicitis.

It’s a lesser-known fact that the Spanish felt threatened by the expedition and sent 4 different groups to stop and arrest members of the expedition. The Spanish were unsuccessful simply because they couldn’t find the Corps of Discovery in the wilderness.

On the return trip from the Pacific, Pierre Cruzatte, one of Clark’s hunters accidentally shot Lewis claiming he mistook him for an elk. Cruzatte was blind in one eye and nearsighted in the other. Lewis ended up being alright, but not before having to endure some severe pain and take several weeks off from activity.

Although some of the tribes the group encountered were hostile towards them, the expedition probably wouldn’t have survived without the help of the Indians along the way. Native Americans provided them with food, supplies, entertainment, shelter, and horses to help them complete their journey. Although a member of the group died, a member was added when Sacagawea had a baby in February of 1805. There were several other people who joined the expedition along the way as well. When Sacagawea died in 1812, Clark became the legal guardian of her son and daughter.

1 year, 6 months, and 1 day after their departure, the expedition reached the Pacific Ocean. It happened at what is present-day Oregon in November of 1805 where they built a fort and spent the winter. Clark’s journal remarks were interesting when he said “Ocian in view! O! the joy.”

You can find an abridged version of their journey on Wikipedia as well as a timeline from PBS. The Center for Digital Research in the Humanities partnered with the University of Nebraska Press and produced an accurate and inclusive edition of the Lewis and Clark journals that you can view. In addition to a typed version of the text, they’ve included their drawn maps, people and places, and plants and animals. Unfortunately, the Northwest Passage did not exist, but this doesn’t mean their adventure was unsuccessful. The journey ended on September 23, 1806, after 2 years, 4 months, and 10 days.

Even though Lewis and Clark discovered that no water route to the Pacific existed, they completed most of their objectives for the trip. Since they made it to the Pacific, they were able to create maps that included topography of the territory and establish American presence for a claim to the land.

They ran across approximately 50 Native American tribes and established relationships with at least 24 of them. This included parades, councils, formal speeches, gift exchanges, and future plans for trade and peace. This insight and knowledge would come in handy in the near future. They brought back several artifacts such as bows and clothing they were given by the Indians.

The expedition recorded 300 new species of plants and animals. They discovered 178 plant species including sagebrush, Bitterroot, and Douglas Fir. They identified 122 animal species such as coyotes, grizzly bears, and prairie dogs. They were able to capture and bring many specimens back with them to study.

The net result was that the Lewis and Clark expedition paved the way for westward expansion including trade, exploration, and further discoveries. They traveled roughly 8,000 miles, not on a highway or interstate, but through a treacherous wilderness. The group seemed to have been given a warm welcome everywhere they went when they returned home. The Lewis and Clark National Historic Trail is a route across the U.S. commemorating their expedition and is part of the National Trails System. The National Park Service, NASA, and the USGS created a cool story map, The Lewis and Clark Trail from Space, assembled from a collection of satellite images highlighting important sites along the route taken by Lewis and Clark during their expedition. Their journey inspired all kinds of people around the country to continue efforts to explore what mysteries were and still are out there waiting to be discovered. 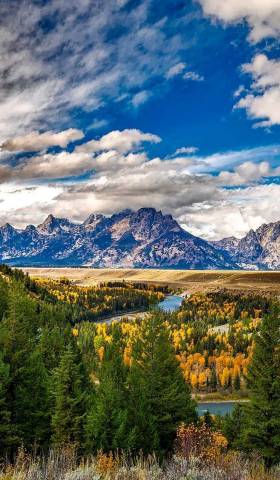